In all of LIFE, and in the architecture and function of the body, when  compatible PARTS  are optimally POSITIONED, they  can CONNECT, BOND and FUNCTION together.   As a consequence, there is a surprising and sometimes miraculous result limited only by TIME.

This is the beginning and the end of the story of The Common Vein and its application to the body.

In Our World of the Body

Sometimes it is what is on the body

Sometimes it is About the External Body

And Sometimes it is What is In the Body

THE ORGANS OF THE BODY

The Common Vein is about defining the simplicity in biology and medicine and building to its complexity.

It is about defining the parts that make up the whole.

It is about identifying the bridges that connect the parts.

It is about learning through perspectives which provide a framework from which the learning process can proceed.

It is about understanding biology and medicine in the context of the whole.

The continuum from the hydrogen atom to the universe provides us with a perspective of an integrated and unified system.

Biology lies within this continuum.

The Common Vein explores biology and medicine within this realm and approaches the concept from three 3 perspectives in order to promote a global understanding.

Three equations reflect these perspectives and set the background to The Common Vein.

1+1 = 1 reflects the mysteries that hold us in awe of biology.

The first equation is fundamental arithmetic known to everybody. The component numbers are numeric, measurable, logical, accurate (usually), and commonly acquired with the aid of an instrument that assigns a number to an aspect of structure or function. In biology and medicine it may be the mere counting of the heart rate, the number of white or red cells in the urine, the concentration of the blood sugar, or serum potassium. One of the first functions of the physician is to decide whether a finding is normal or abnormal. For example, when the volume of the spleen is 1000ccs, the patient unquestionably has a large and abnormal spleen. What becomes in question now is the cause of the splenomegaly, and the treatment.

The training student, when first introduced to clinical evaluation is instructed how to use visual, palpatory, and auditory skills with the well known mantra of “inspection palpation and percussion”.  In the current practice of medicine, sole use of the human senses without technology has limited ability to measure the full extent of size shape position and character of the parts and functions of the body.

The need to delve beyond our immediate scope in any of the sciences has innovated tools which have advanced our senses to a new level of measurement and consequently of  understanding.   Some examples include the microscope, stethoscope, beaumonometer, EKG, EEG, X-ray, ultrasound, and MRI machines.

The second equation is not as straight forward and reflects the human input into the field.  The component numbers could be numeric, measurable, logical, and accurate, but human intuition plays a key role in intergating the information and reaching a conclusion.

Since science and biology is complex they have to be tackled one piece at a time.  The human body has so many moving parts that it requires initial evaluation of each part in isolation, and then an integrated evaluation of the whole.  While computers and technology may succeed in the quantitative evaluation by defining measurements of individual structures, they cannot comprehend the whole in the way that the practiced observer, be it architect, lawyer, teacher, biologist or the physician can.  The art of intuitively and almost instantaneously making an early diagnosis in the patient, whose cough is hoarse, whose skin is wrinkled from the loss of elastcicty from smoking, whose fingers are now clubbed, whose left pupil seems to be constricted, a small new tremor,whose demeanour of body language has changed, whose handshake is limp, is within the realm of the experienced physician.  In an instant the practiced professional is able to take it all in and synthesise the information. In such a patient, a left apical lung cancer (of Pancoast) with metastatic disease to the recurrent laryngeal nerve and left side of the brain needs to be considered, even before a word is spoken between patient and doctor.  The art of  medicine is the “geshtalt” or intuition.  The equation  1+1 ≈ 2  is applied to the art of biology and medicine in this instance.  The clinician does not need to measure the quantitative changes in the voice, nor the size of the pupils or wrinkles nor the elasticity of the skin.  Subjective and perceptive coordinated evaluation of the whole is all that is necessary to reach a diagnostic direction. There is no substitute in the 1+1=2 technical world for the immeasurable “geshtalt” and it is this equation that reflects the close to accurate approximation.  The universal descriptors that the clinician had unconciously applied in the analysis of the structures in that moment of brief interchange included the size shape position and character of each of the structures and functions mentioned.  Things had changed in the patient since the previous visit which the doctor was able to notice, and a fifth element in the descriptors includes the effects of time.

The third equation is 1 + 1 = 1 and it makes even less intuitive sense, but communicates a crucial tenet of The Common Vein.  The component numbers could be numeric, measurable, logical, and accurate, but the power of numbers plays a key role in coming to an illogical surprising and sometimes magical result.  It implies that whole is a unified bigger than the sum of its parts.  It applies when the power of numbers link and organize as one, sometimes with the aid of a facilitator, and the result is awesome, inspiring, mysterious, and even magical.  A supreme  example may be that an individual brain cell does not have the power to think (or so it seems) but when connected and organized with billions of like cells, the magical and miraculous process of thought or speech, or creativity, or even just coordinated movement manifests.  The equation may represent something as simple as the formation of a water molecule from two atoms of hydrogen and one of oxygen, or the conversion of sugar to glucose in the presence of an enzyme.  At the other extreme it also represents the world of human accomplishment in art, music, athletics, dance, or literature, and the world of nature, and religion.  In each of these, the combination of the parts produces inspiring and unexpecterd results, greater than the sum of the parts.  The term “units to unity”  is also used to reflect this equation.

Why use 1 as a result rather than 3 or even 1 million for example you may ask?  In essence the perception is that there is a continuum in the organization of structure from the atom to the universe, where the parts as single units link and organize and form a new structure or a singular unit, bigger and more powerful than the individual units, only to be a part or a unit of something bigger and more powerful than itself.  The term “units to unity” emphasises the use of the singular units to build a new singular unit and from this perspective,  1+1 = 1  is accurate.

The three equations  represent a framework from which The Common Vein retains a global perspective of the world around and within us. They have broad application to the activities of life but in the context of The Common Vein have specific implication in the study and understanding of biology and medicine.  The equations while representing separate views are interdependent and all necessary to provide full understanding.

In summary, the first equation  is the bean counting quantification in science, medicine and research. The second is the world where we practice a human discipline, integrated with the quantification provided by the tools of the trade, and used to solve problems in a practical way.  It is the realm of the astute and practiced observer and is a goal for educating students within the discipline.  The third is beyond human reason, as we stand in awe of  the mystery and magic of life, and it provides a perspective for humanity.  The last equation is the part when we pause to smell the roses  – the enriching and fulfilling part of life. 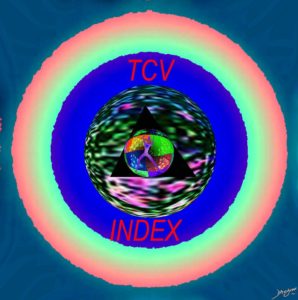 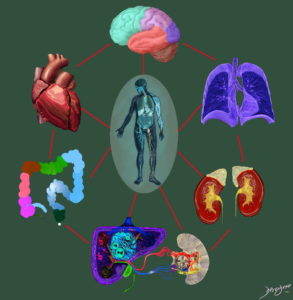